The Loneliness Index: The loneliest places for the elderly mapped

Social isolation is nothing new. In fact, pre-pandemic ONS reports already illustrated the extent of loneliness, with one in four people admitting to feeling it. It’s not just an unpleasant emotion – feeling lonely is proven to have a catastrophic effect on personal health.

Whilst people aged between 18 and 24 were most likely to experience loneliness in the initial lockdown, it was older people who had to abide by the most stringent distancing measures due to their susceptibility. Unsurprisingly older people have taken the brunt of the coronavirus measures, leading to a sharp increase in loneliness and social isolation, with one in three reporting feeling lonelier in the wake of the COVID-19 pandemic.

With this in mind, Care Sourcer used a culmination of people, place and population ONS data to create a Loneliness Index that reveals which areas are the loneliest and which are working the hardest to help combat the emerging isolation epidemic in older communities.

Lonely up North: Durham is the UK’s loneliest place for over-65s 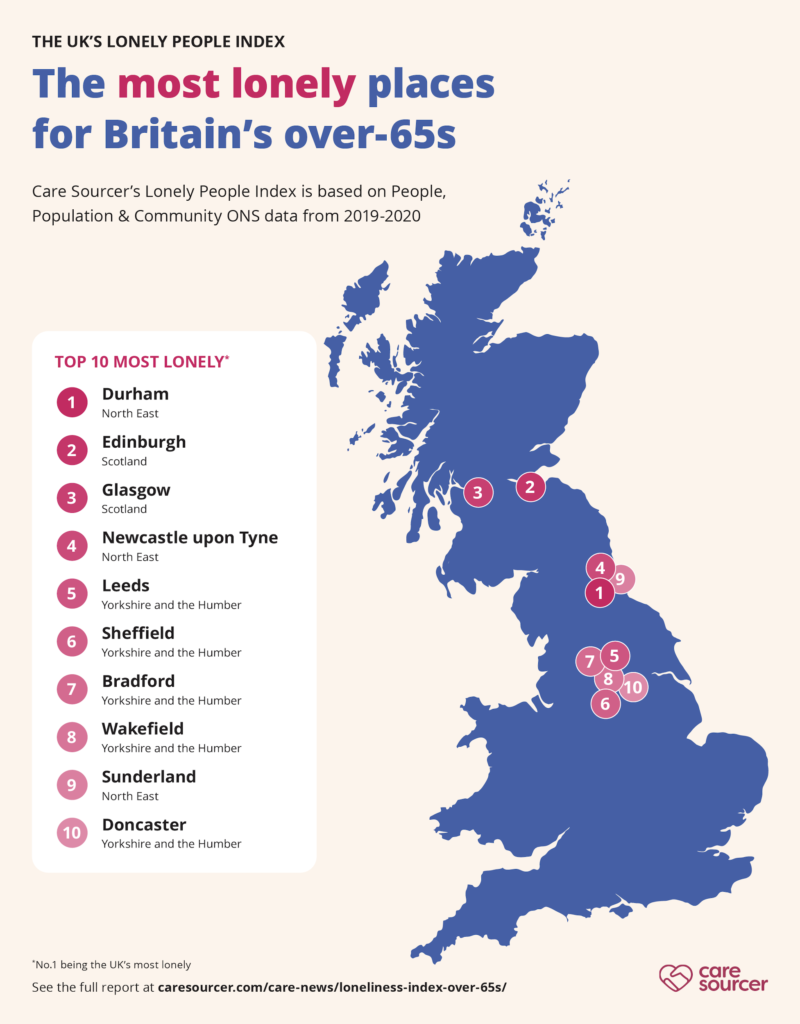 The top 20 loneliest places in the UK

Whilst nowhere in the UK has escaped the impact of 2020, it’s in the North where loneliness has been most acutely felt since the beginning of lockdown. The North East region, specifically Durham tops our list as the loneliest place in the UK. Newcastle upon Tyne and Sunderland also rank in the top ten at numbers four and nine respectively.

In fact the top 10 loneliest places are all located above the Watford Gap, with the two major Scottish cities of Edinburgh and Glasgow coming in at number two and three, and all the other top spots being located within the Yorkshire and the Humber region.

The South East, the least lonely region of the UK.

Despite the reputation of big cities as isolating places to live, it’s London and areas in the surrounding regions that score lowest in our lonely index. The index revealed that the most sociable regions were dominated by the South East, East of England and London regions. 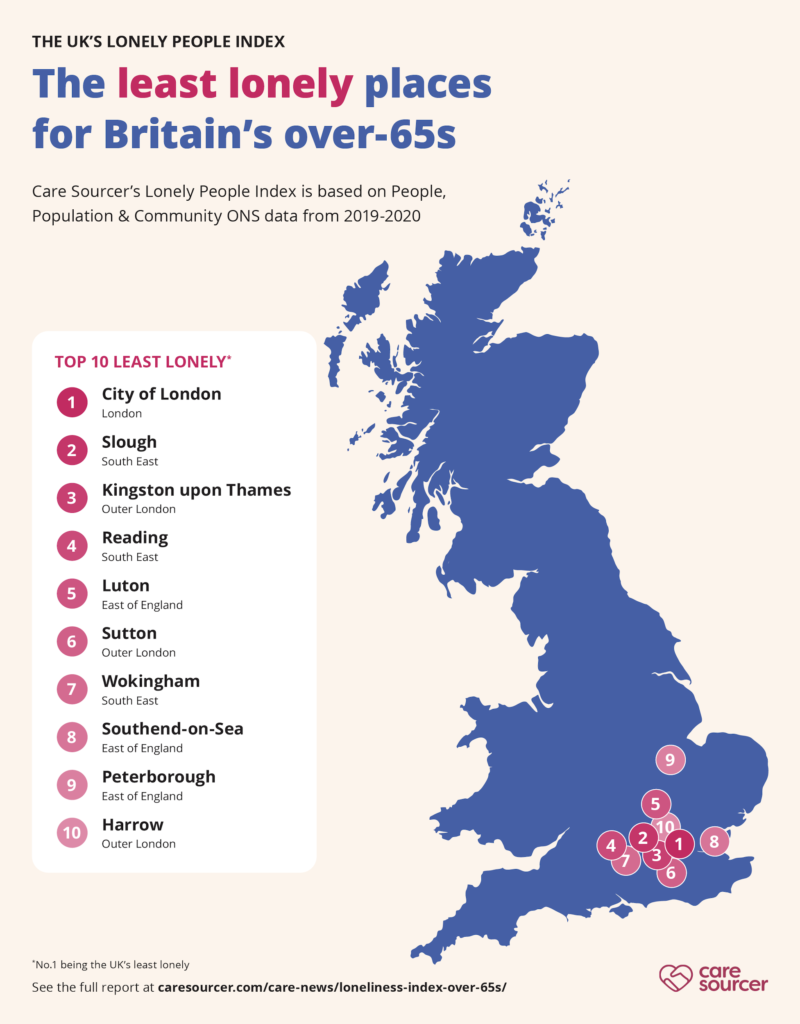 The least lonely places in the UK

The City of London itself is officially the least lonely place to live in Britain, scoring 600 points lower than the UK’s loneliest place. London is followed closely by Slough at number two and Kingston Upon Thames pipping Reading to the post in the last spot of the top three.

North of the border in Scotland is the happiest place in the UK.

Whilst the Scottish capital and Glasgow may be in the running for two of the loneliest places in the UK, the two happiest places to live are also located north of the border. Stornoway in the Outer Hebrides is the most joyous place to live, placing first on our happiness index. Kirkwall on the Orkney Islands places second, suggesting that smaller tight knit communities are where older people feel most affirmation. Bournemouth on England’s south coast ranks third,with our top three towns all being by the seaside. Maybe there’s something in that sea air after all. 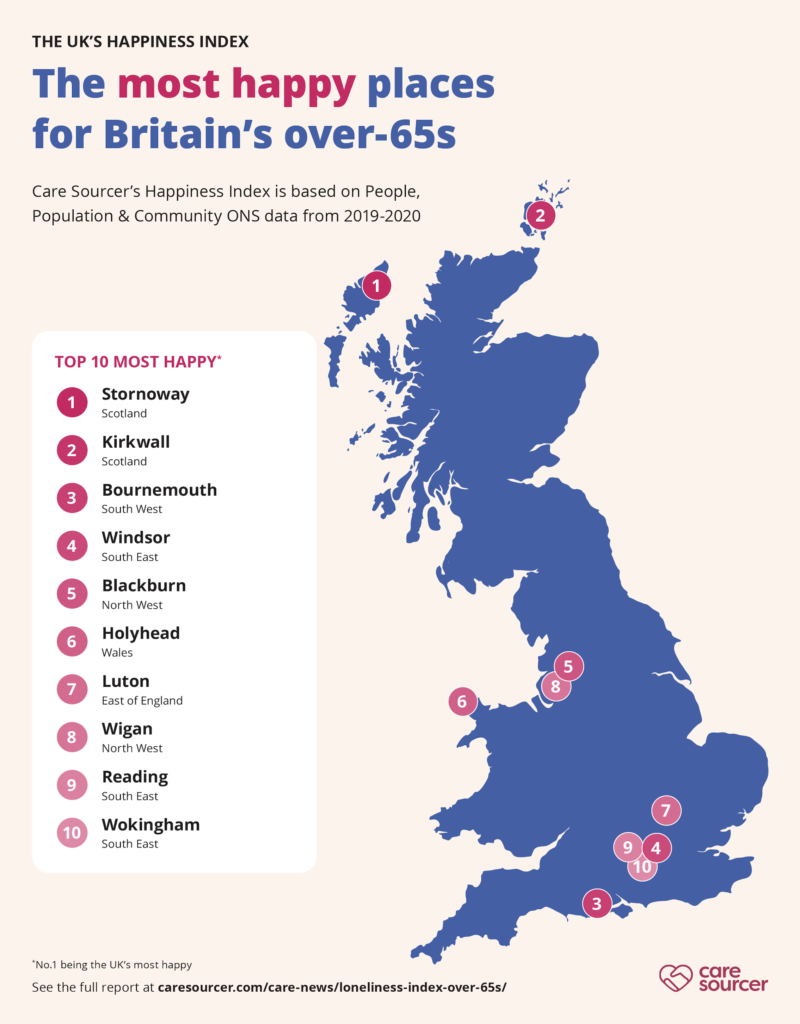 Dudley tops the chart as the saddest place in Britian

The West Midlands town of Dudley is officially the saddest place in the United Kingdom followed closely by its East Midlands counterpart, Nottingham. The Scottish university town of Dundee is number three on the list, with the rest of the top ten being geographically disparate, including the North East city of Newcastle, which is also one of the loneliest in the UK. The Welsh town of Aberdare is fifth, followed by Doncaster, Glasgow and Middlesbrough. 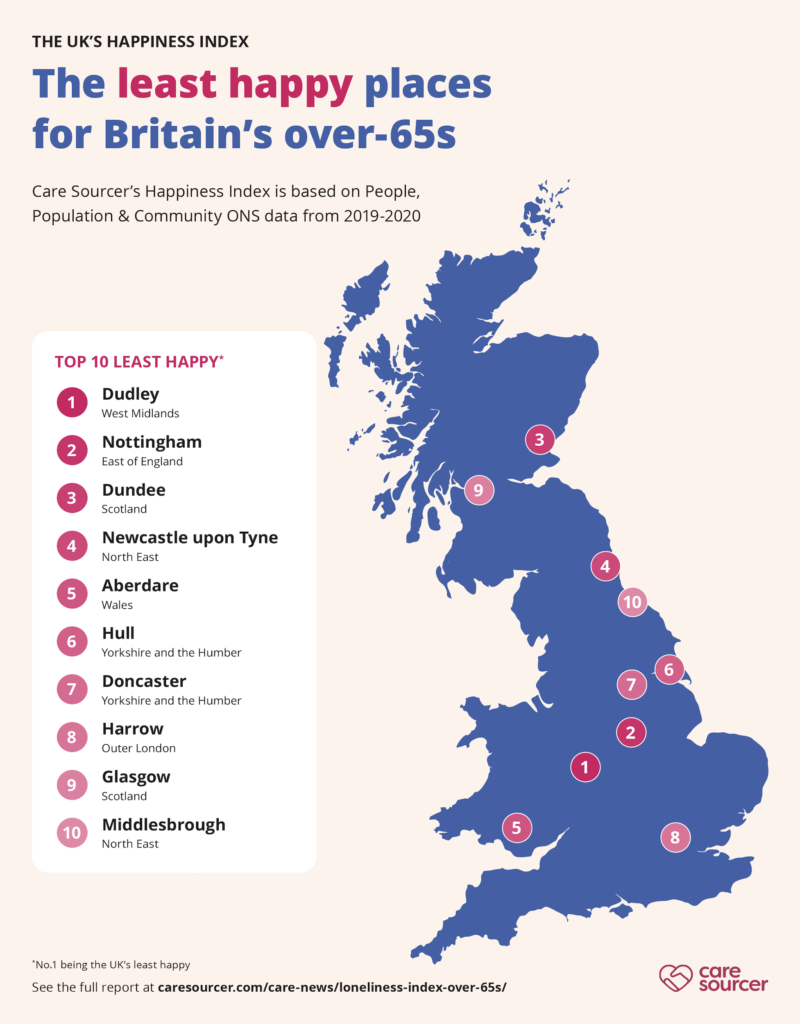 The top 20 least happy places in the UK

People reaching out in a good old fashioned way

While we live in a more interconnected society than ever before, if anything the ease of communication counterintuitively seems to have led to increased social isolation. Perhaps this is why a number of people have turned to more analogue ways of forming a connection. 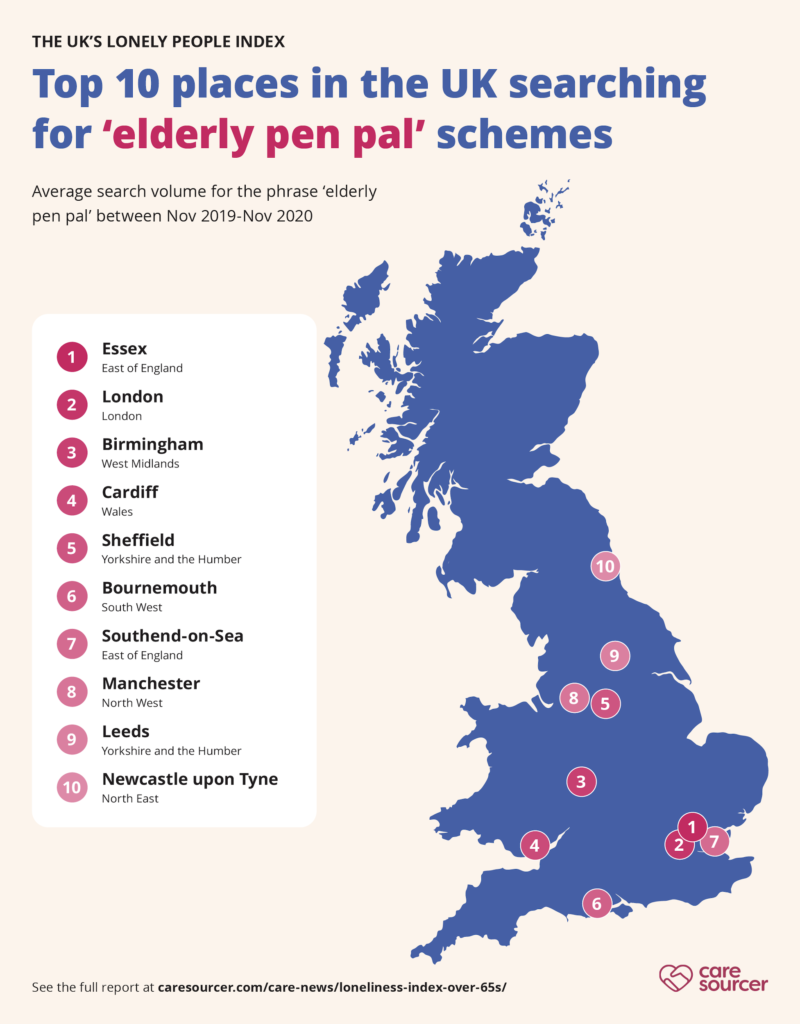 Top 20 places where elderly people are trying to reach out

The number of people searching for elderly pen pal schemes across the UK has shot up this year across the country. Essex, London and Birmingham are the places in which people have been most eager to join projects, while the lowest engagement came from the North West. Specifically Hull and Doncaster, the two Yorkshire towns which also feature as two of the saddest places in the UK.

To calculate the Loneliness Index, four metrics were used (divorces, self reported health, age and household size) to create individual scores that were combined to create the overall Loneliness Index. High divorces, high levels of a low satisfaction score in regards to health, large populations of 65+ and smaller households all contribute to loneliness according to the UK government’s ONS study. Those scoring higher were assigned bigger Index Scores.

The Happiness Index was calculated using the ONS wellbeing data set which estimates level of personal wellbeing for constituencies across the UK.

Search volumes for ‘elderly pen pal’ scheme was collected from Keyword.io. For areas where there was no data, the region’s average was used.

If you have a press enquiry, please email v.shepherd@caresourcer.com